During the ceremony, the production lines of the vegetable storage were formally launched and an introductory tour was done. The guests were able to see the acceptance, sorting and packing of potato that was grown in Irrico fields. 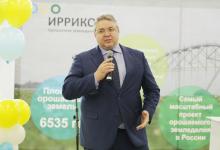 Official website of the Governor of Stavropol Territory: https://gubernator.stavkray.ru/press-center/news/item/9257-na-stavropole-otkryto-sovremennoe-ovoshchekhranilishche.html